Welcome to 2010! Sorry for not writing. I took somewhat of an extended vacation...
This article is from my science fair project: "Grey Matters!"
Enjoy!

A generator is a motor in reverse, consisting of coils of wire. Real generators in most applications are more complex than the one in this diagram, however it better demonstrates the theory behind how generators produce current. This theory is called electromagnetic induction, and was discovered by Michael Faraday in 1831. This theory, also called Faraday’s Law, dictates that a changing magnetic field produces a voltage through the coil. 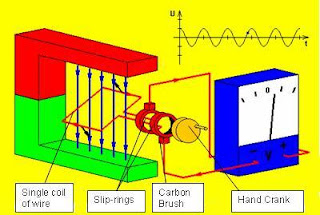 The magnet in the diagram creates a magnetic field, normally invisible but here shown in blue, going from its north pole, in red, to its south pole, in green. To generate electricity, a mechanical force, such as falling water in the case of my experiment (and hydroelectric dams), turns the coil, causing it to “cut” the magnetic field (blue). This means that at one point in its spin, the voltage spikes as almost the entire coil is cutting across the magnetic field. This also means that at another point, the voltage drops as almost the entire coil is parallel the field. After this, it happens in reverse, causing the voltage to change direction. This type of generator produces AC current. Admittedly, this might not be the type in my project, however the idea is the same. The faster the coil spins, the more power it generates. This can be read using a volt meter.
Posted by Casey Broughton at 2:44 PM